Unsupervised learning problems such as anomaly detection and clustering are challenging due to the lack of labels required for training embeddings and validating the results. Therefore, it becomes essential to use the right encoding schemes, dimensionality reduction methods, and models. In these types of learning problems, manipulating numerical variables is straightforward as they can be easily plugged into statistical methods. For example, it is easy to find mean and standard deviations in the height of a population. 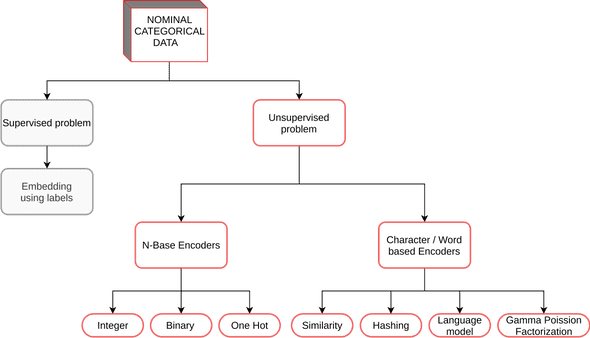 In this blog, we focus on encoding schemes for nominal categorical variables. Figure 1 summarizes the commonly used encoders for these problems. These variables are particularly challenging because they have no inherent ordering, for e.g., weather can be rainy, sunny, snowy, etc. Encoding to numbers is challenging because we want to avoid distorting the distances between the levels of the variables. In other words, if we encode rainy as 0, sunny as 1, and snowy as 2 then the model will interpret rainy to be closer to sunny than snowy which is not true. A common approach is to use a one-hot encoding scheme. The method works well because all the one-hot vectors are orthogonal to each other preserving the true distances. However, when the cardinality of the variables increases, one-hot encoding explodes the computation. For example, if we have 1000 different types of weather conditions then one-hot would give a 1000 dimension vector. To improve performance, we may choose to reduce dimensions using various forms of matrix decomposition techniques. However, since we cannot go back to the original dimensional space, we lose explainability in this process. Therefore, we search for encoders that optimally balance the trade-off between performance and explainability.

The following video presents a brief description of the project and how to get started.

In this section, we describe various types of encoders that we experimented with. For each encoder, we briefly describe the process of encoding and also their pros and cons in terms of performance and explainability. For a better explanation, we are using an example categorical variable employee title that could have values such as software developer, civil engineer, etc.

To illustrate the interpretation capabilities of this method, we use the example of employee titles. The encoder converts the data into output vectors of length 10 (10 components). The following list shows dominant keywords in each of the 10 components. 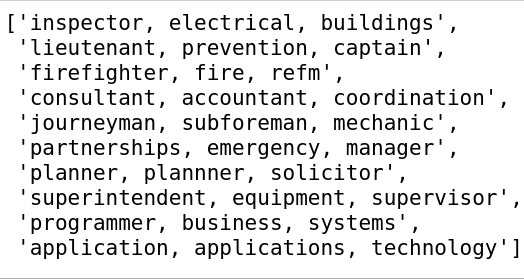 For evaluating the performance of these methods, we take a dataset with different employment position titles and their corresponding remuneration. We encode the categorical variable position title using the methods described above. Then, we define a dummy binary classification task of predicting whether or not the employee earns more than 100,000 units. To evaluate the performance of each encoding method, we use the same xgboost classification algorithm. Figure 3 shows the results obtained. Word-based encoders outperform the base N encoders. The hashing encoder performed the worst followed by one-hot, integer, and binary encoder. Similarity encoder performed the best with online gamma poisson factorization (OGPF) as a close second.

Next, we are going to see how we can apply gamma poisson factorization in an unsupervised setting.

Figure 5: Example rule path for detecting a system as an anomaly

The tree can be interpreted in the following way:

Encoding nominal categorical variables in unsupervised learning problems while optimizing the trade-off between performance and explainability is a challenging problem. We explored several techniques used in the literature for an example dataset evaluating the pros and cons of each. If the cardinality (number of levels) of nominal categories is less, then one-hot encoding should be preferred as it preserves the distance between the categories. The interpretation of low and high cardinality depends on the domain but high cardinality would imply hundreds of unique category levels. If the cardinality is high, then we have to use the information present in the string of the nominal variable. Word-based encoders like Similarity encoder and online gamma poisson factorization encoder try to extract information from the n-grams (collection of characters) present in the strings. The evidence suggests that they increase the performance of the classifier indicating that they provide meaningful representation. The online gamma factorization encoder also provides an interpretation of the reduced dimensional space which can be useful in unsupervised tasks. In the example application of the method to an anomaly detection problem, we saw how it can be effectively used as input to an isolation forest and then interpreted using the feature names.

Contribute to this page